Moana Nui and Fair Trade Partnerships in the Pacific

Important travel and trade practices that have long formed extended exchange communities of Oceania will be the focus of the upcoming Moana Nui summit of Pacific Islanders to be held in Honolulu, Hawaii November 9, 10, and 11, 2011.
These practices are endangered by a proposed trade agreement comparable to NAFTA, but encompassing countries on the Pacific Rim rather than those in North America. The proposed agreement, known as the Trans-Pacific Partnership (TPP), would have the same devastating impacts on local production networks, trading practices, and populations in the Pacific Rim, as NAFTA on jobs, farms, and other sectors in North America. The United States has drafted Australia, Brunei, Chile, New Zealand, Peru, Singapore, Malaysia and Vietnam into developing the TPP; the number of nations might increase as the conservative trade organization, Asian Pacific Economic Cooperation (APEC), meets in Honolulu to attempt to finalize language for the TPP.
The topics and the content of the many preliminary discussions leading to the APEC meeting in Honolulu have been kept secret, thereby violating transparency protocols of democratic governments and U.S. President Obama’s explicit promise that the TPP discussions would usher in a new era of transparency in international trade agreement discussions.
As Lori Wallach of Public Citizen’s office of Global Trade Watch said,


“The fact that negotiators have gone out of their way to execute a special secrecy agreement has made a lot of people wonder just what exactly they are so afraid the press, the public and Congress would see if there was openness. While executives from hundreds of corporations have been named ‘official trade advisors’ by the Obama administration and given access to the texts, the people whose lives would be most affected may never get to see what our negotiators are bargaining for – and bargaining away – until it’s all over.”

How is democracy impacted by the proposed TPP agreement? The secrecy of the TPP process violates several central principles of democratic governance. Preventing dialogue among constituents makes it impossible for the representatives to be held accountable to their voters, a common problem in trade negotiations (as seen through the entire WTO process). From the perspective of the subaltern, however, the failures of elected leaders and government trade officials to practice democracy only confirm already well-established understanding that democracy as carried out by the nation-state will not address local community concerns and may even be hostile to their very survival.

The TPP does represent a threat to local networks and modes of responsibility on which local subaltern communities always already base their democratic practices, as Gayatri Spivak and many others have pointed out. As Deniz Kandiyoti has argued, integration of local social networks into modern national governance destroys the bonds of those networks. They are replaced with bonds and loyalties and networks that support the state, capitalist entities and venues, and their development policies.


If accepted by APEC nations and others, the TPP would open the door to nation-states to destroy local trade systems on grounds that they interfere with “free trade,” by which they mean trade that benefits transnational corporations and not local communities. This same process has been seen time and again in Mexico under NAFTA and in other countries where countries have signed onto bilateral and multilateral trade pacts with the U.S.


The Moana Nui summit is a direct response to the TPP, intended “to call public attention to the critical importance of maintaining sound and productive local economies in the Pacific Islands both for their own sake and food security in the world. Invited speakers will include Native economists, farm and fishery practitioners, advocates for political and economic sovereignty, specialists in media, public education, environmental studies and law.” The meeting is open to the public on November 10 and 11 and all are welcome to attend.

The Moana Nui summit builds on both the long history of already existing production and trade practices of the Pacific Ocean, and also on a long history of resistance to globalization and its destructive effects articulated so well by Epeli Hau’ofa in his essay “Our Sea of Islands”. Islanders have fought back against the destructive effects of global fishing industry, as nations have failed to regulate their fishing boats using massive nets that reduce fish populations. Eight Pacific island nations have developed a subregional agreement known as the Nauru Agreement to limit purse seine fishing licenses and address these destructive impacts. The Pacific Network on Globalization is also fighting for trade justice in other issue areas as well.
The Moana Nui summit is only one step on a road that many people already walk to see how local islander communities are responding to these threats in ways that honor local decision-making practices and ethics. How effectively the long-established Pacific Islander production and exchange communities survive the onslaught of globalization, free trade agreements, and the TPP is a story still in the making.
Posted by D2C at 12:24 PM 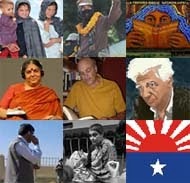